“98% of Singaporeans will try a product when a sample are given out, and 86% of those who try will buy it again”.

So Coca-cola believes that by giving away free samples, more Coke Zero will be sold here. Whereas in Britain, only 66% of those who sampled went on to buy Coke Zero. 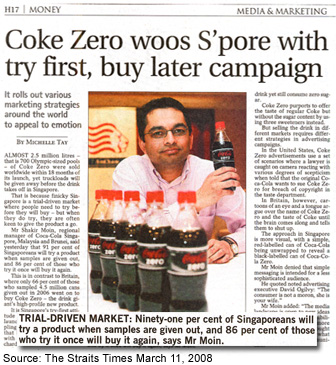 According to the above report, Coke Zero had been launched in 51 countries since 2005 and sold “almost 2.5 million litres” within 18 months. 2.5 million litres is about 7 million (12 fl oz) cans or 1.25 million (2 litres) bottles. Let’s say Coca-Cola sells each can of Coke Zero for US$.50, 7 million cans will generate a paltry revenue of US$3.5 million.

If the figures published in The Straits Times are correct then I think not many people like Coke Zero and is not selling well so they decided to give away free samples in Singapore.

Artificial Sweetener May Cause Cancer

Ask yourself what is it that they put in to replace the sugar? Artificial sweeteners!

Find out more about Coke Zero ingredients and artificial sweetener at Wikipedia.